When it comes to the design in this show, I wanted to create something simple but powerful. The set, costumes and props are decorated with flowers, nature and lots of other floral patterns. At the beginning of the play, Louise talks about this jungle she envisions in her mind and how real it felt to her. This is where the inspiration started when it came to designing “Jungle Door”. The use of the floral patterns in the design is also seen by the girl’s planning Michelle’s wedding. We see a girly-girl sense in this as well when the two begin make arrangements for the wedding.

The sense of the jungle also comes back to the wedding as we see Michelle walking down the aisle with all these floral patterns around her. The colours used are to try and help replicate that as well. We decided on using a lot of pinks and purples with some greens thrown in as well. For the two characters, each of their looks are quite different but we were able to find them both by using these particular colours. For Michelle, she is a real “girly-girl” and loves to look her best. She wears a lot of dresses and will not settle for second best. The pinks and purples really help in accentuating this and making it “pop” that bit more on stage. Louise on the other hand, is the complete opposite. She doesn’t make a fuss when it comes to her looks and just tries to get through the day in the best way possible. The pinks and greens help in expressing her freedom and relaxed attitude to life. – Sabrina Kelleher 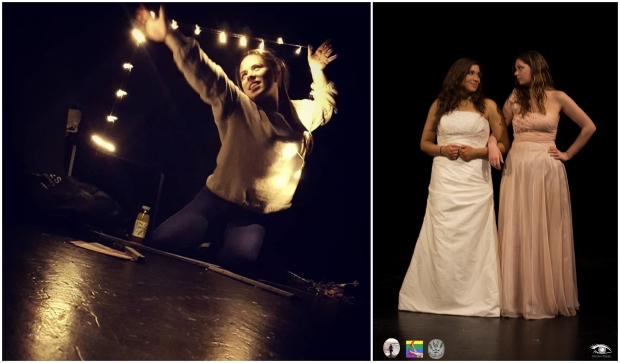 I was inspired to write Jungle Door after reading an article about the hidden homeless, this article featured the story of a young woman living and working full time in London who could not afford rent, each night she would sleep in her car. Another story highlighted in the article revealed the dangerous situations renters can be forced into following sudden unemployment in expensive cities. Newly unemployed a young woman was manipulated into exchanging sex for rent and sharing the apartment she once called her own with her landlord. Further research revealed this arrangement is becoming more common in high priced cities, with advertisements placed by landlords looking for female companions. The advertisements are aimed at students and women completing unpaid internships in order to work in the field of their degree, a work phase that is very common now. Although the article that initiated my research was based in London, this issue is also prevalent in Dublin and Galway.
As the housing crisis worsens in Galway everyday I hear people are struggling to pay rent even if they are in full time employment. The hidden homeless are prevalent in this city but are as the title suggests hidden. When writing the play, it was very important to me that the audience become familiar with Louise as a flawed individual prior to associating her with the hidden homeless, showcasing the humanity of a large national crisis. The use of multimedia in this production allows the audience to view Louise’s life as Michelle does through social media, a tool that can be used effectively to portray the life Louise wants to believe that she has.

Michelle also uses social media to create a persona quite distant from her own, but unlike Louise she is desperately attempting to become that persona. This leads to obsessive dieting and exercise and eventually paying for plastic surgery. Michelle also risks putting her and her partner in debt by deciding to pay extra rent so that they can live alone as a married couple. She is driven to this action by a belief that they should at this stage in their life’s, even if they can’t afford it. Exploring the risks some undertake to keep up appearances especially via social media. Michelle and Louise’s relationship is at the heart of this play, the love that was once shared and the friendship that remains drives both of the characters to grow and change for better or worse. – Rena Bryson

OUT OF THE REHEARSAL ROOM

Elizabeth Flaherty and Rena Bryson with Rabbit’s Riot founders Sonia Norris and Treasa Nealon at the official launch of Where We Are Now 2018 at Anderson’s Bar and Grill Sligo on May 1st 2018. 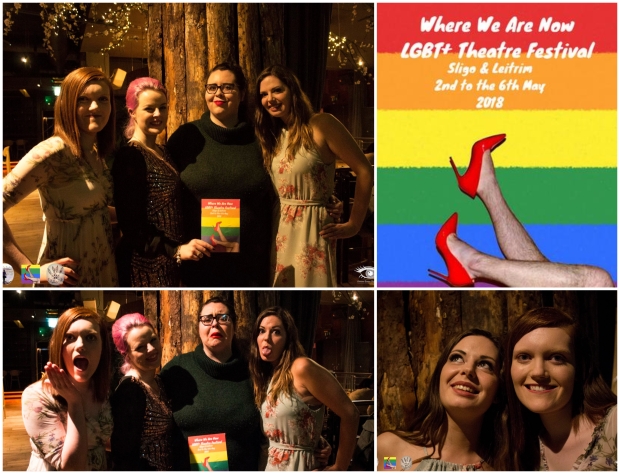