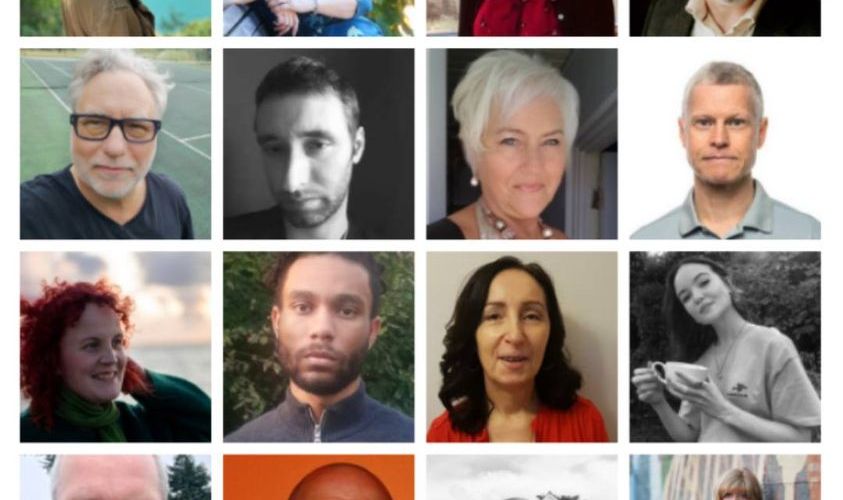 Our annual Creative Writing Night will showcase new writing from several talented artists. From poetry to plays and short stories to songs. This year we have chosen to support Samaritans. Every seven seconds, Samaritans answer a call for help. They’re here, day or night, for anyone who’s struggling to cope, who needs someone to listen without judgement or pressure. Please donate generously through the link below:
https://www.justgiving.com/fundrai…/evasechotheatrecompany

Due to Covid 19 restrictions this year’s event will take place online, which is exciting as there is no limit to our potential audience! You can tune in on Friday the 11th at 8pm via our Facebook page.

Meet the Writers Behind the Words

Tom is a writer of poetry, articles and this is his first play. Member of Tullamore Rhymers Club, Longford Writers and Immagine & Poesia collective among others , he grew up in Offaly but his family from both sides are from Ballinalee in North Longford. He has been living in Renmore for the last six years or so.

John is a playwright and screenwriter of dozens of one-act plays and short films that lean towards dark comedies (some of which can be found on his website JVPWriter.com). He also has experience in producing, directing, and acting.

The Original Inspiration’ (One Saturday Morning) from ‘Poems From a Depressed Mind’ by Steve Dixon.

Steve discovered his Poetry prowess after a mentally tough time at the start of Lockdown 1.0 – freeing some of the negativity by transferring it to words on a page. He also had two books published, started his own publishing business. Oh, and he also became a Grandad! You can find all about Steve’s delightfully named publishing company, Pretty Pug Publishing at prettypug.co.uk or follow them on @pretty_pug”

‘The Fear of Stairs’ by Emma Dawson

Emma Dawson is a playwright and short story writer. Her full-length play, Mum, was performed in online readings with the Dramatists Guild of America and Up ‘Ere Productions, while her short plays have been performed at Theatre503, Battersea Arts Centre, and Pleasance Theatre. Her short stories have been published by Untitled: Voices, Dear Damsels, and Inkapture.

Adam is a former musician and amateur writer turned Secondary School Teacher. Holding an undergraduate Degree in English and History, Adam still pursues the arts in his free time. Working primarily on a short novel, Adam has also taken to adapting another early novel draft into graphic novel format in cooperation with his long-time friend, Conor Moylan. Conor is a freelance graphic designer finishing a BA in Visual Communication with a foundation in illustration from an early age. Branding and logo design are also large aspirations for the designer. Conor aspires to be a creative director of an illustrative based creative design business.

His short comedies have been produced on four continents from New York and London to Sydney and Chennai. His most popular play, Threatened Panda Fights Back, has had over a dozen productions. Rex has a Master of Arts (Honors) in Languages and Literature from the University of Auckland and is currently a senior collections librarian at Auckland Libraries. You can find out more about his plays on his website: rexmcgregor.com.

Cris is a writer for the page, stage and screen. He wrote and co-produced The Brother’s Survivor, which won a Bronze Remi Award from the Worldfest Houston International Film and Video Festival and his short story “Soul Cowboys” was awarded the Christopher Hewitt Award in Fiction and earned him a Pushcart Prize nomination. His play Concrete Jungle won the Grand Prize of the AMAZE Playwriting Competition and was a semi-finalist for the Maxim Mazumdar New Play Competition; his play The Moors was the Judge’s Pick at the Negro Ensemble Company’s 10-Minute Play Competition and his play Metro was regarded as Highly Commendable by Vectis Radio’s Radio Play Competition (England).

Emily Reader is an award-winning writer specialising in dark comedy for audio and television. Her stage play, Rumours, was performed both in Exeter and at the Inter-University Drama Festival in Glasgow in 2018. In May 2020, she adapted the script into a radio play. Her short film, Swan Song, and accompanying essay won her the Zara Malone Memorial Prize for the highest creative writing mark in her year. She has a portfolio of television scripts and is in conversation with agents about writing projects.

Gemma is a professional script and screenwriter with a Post-Graduate Diploma in scriptwriting and 5 years experience. She has had her theatre work shown at the Southwark playhouse , The young Pleasance and The Queens theatre – and she currently has three short films in post production. I also work as a script consultant and owns an accessible script reading service ‘Nine Notes’.

‘The Secret’ by Jenni Nikinmaa.

Jenni is a wanderer, a poet and a playwright who was born in Finland but is currently based in Galway, Ireland. She graduated from the MA in Playwriting & Dramaturgy from National University of Galway in 2020, was shortlisted for Alpine Fellowship Theatre Prize the same year and loves to work through blending reality and fantasy, autobiographical and fairytale, truth and stories into beautiful and disturbing pieces.

Allison creates stories for the stage and the page that (sur)pass the Bechdel Test and enlist their characters in a caricature of the idiocies and intricacies of insidious isms. Her work has been presented by Accidental Shakespeare Company, American Blues Theater, Clutch Productions, Experimental Theatre Cooperative, Ophelia’s Jump Productions, StageQ, Thornhill Theatre, UNO Theatre, Violet Surprise Theatre, and the Women’s Theatre Festival. In addition to writing, Allison delights in vintage shopping, volunteering, and tending to her thespian tendencies.

Cathal is an actor and writer from Mayo, who after a small stint in acting in school and a bit of writing in college has rekindled his passion for both in 2020.

Rose is from the north side of Dublin and now lives in Roscommon. She writes plays, screenplays and short stories. Her short film “Expiry Date” was produced earlier this year. (2020). A variety of her short plays were performed in Cruthu Arts Festival, Longford and in King House, Boyle. Several of her flash plays were performed as rehearsed readings in The Dock Arts Center, Carrick on Shannon. Rose has had two radio plays produced by Near FM in Dublin and Shannonside Radio. Her short stories and articles have been published in various anthologies and newspapers.

‘Rainbows and Fevers’ by P.J. Reed.

P.J. is an award-winning, multi-genre author with books ranging from high fantasy, horror, to haiku. She writes the Richard Radcliffe Paranormal Investigations series and the Bad Decisions series. Reed is also the editor and chief paranormal investigator for the Exmoor Noir newsletter.Finally, she has written a series of seasonal haiku collections – Haiku Yellow, Haiku Gold, and Haiku Ice as well as Flicker one sizzling senryu collection.

Michael has written two full-length plays set in 1940, and several one-act plays and monologues. ‘Mahatmas’ was shortlisted for the Kenneth Branagh Drama Award last year. A short story using a carol theme, ‘A Big Issue’, has been recorded by BBC Radio Suffolk and will be broadcast during December. When not writing, researching, doing chores and spending precious time with Alison, he enjoys cooking, exercise, gardening, and theatre in whatever way possible.

‘When is Penney’s Opening…’ by Maggi McKenna.

Maggi is a member of Longford Writer’s group and Further theatre company . She is also known as Maggi the storyteller and visits schools and libraries doing events and festivals. She recently returned to college and studied performance arts and theatre studies. Maggi have taken part in several plays and also a few short films and also enjoys performing stand up comedy.