We we’re so honoured and excited to present work from many talented playwrights while fundraising for the amazing Jigsaw Galway on December 5th at the Róisín Dubh.

The night opened with a scene from Hazel Doolan’s Match, the script that brought Eva’s Echo’s founders together through a Creative Writing Night in 2015. The first half of this piece was read by Rena Bryson and Hazel Doolan before actor Elizabeth Flaherty was pulled up on stage to play Ann, as she had done in the award wining 2017 production of Match. 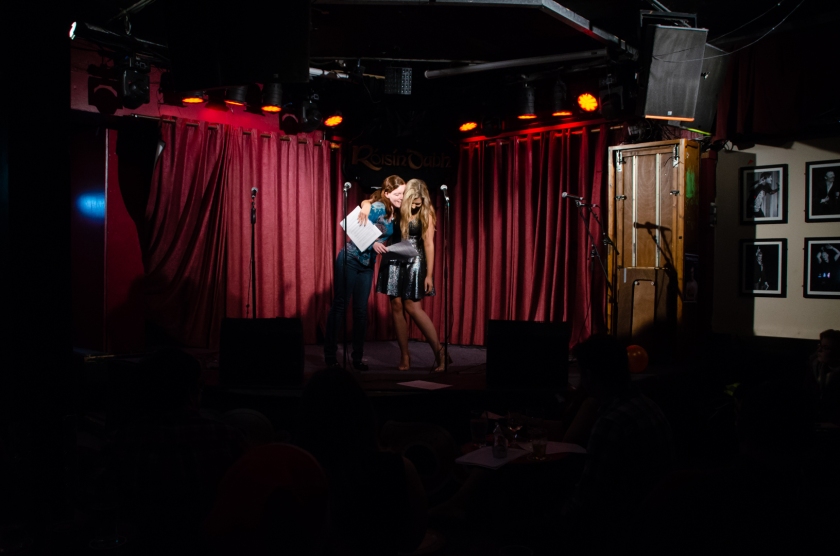 This was followed by ‘Starseed’ by Mayo based playwright Killian Glynn. He’s a graduate of IT Sligo and played George in Eva’s Echo first production of ‘Match.’ He is also the founder of the ‘Where We Are Now’ LGBT Theatre festival in Sligo. The piece was performed by Elizabeth Flaherty and Mícheál Ó Fearraigh.

Homeless and disillusioned, Iris is far from the goddess she was named for. Between roughing it on the streets with her friend Gavrail and fighting the terrifying visions that come to her nightly, she begins to lose touch with reality. So when a stranger offers her a way out, Iris realizes she has an important decision to make…

The next piece was ‘Finding Your Way’ by Rebecca Spelman, the artistic director of Calamity Theatre, a Galway based company who premiered their first production Apoptosis at the Galway Fringe Festival during the summer. The performance piece was an excerpt from Calamity Theatre’s upcoming event, ‘Finding Your Way.’ Audiences will soon get a chance to take part in a scavenger hunt across Galway where you have to find special characters who will give you clues. If you don’t want to miss Finding Your Way, make sure to follow Calamity Theatre on Facebook, Instagram and Twitter, so you know when it’s happening. The piece was performed by Seán Gandolfi and Lucy Pollock.

The next ‘Manologue’ by Unamused’s Annie Keegan was performed by the playwright herself. Unamused are a Dublin based theatre company, although playwright and company founder Annie has settled in Galway after completing her MA in playwriting at NUI Galway. They recently presented their sell out show Down the Drain at the Dublin Fringe Festival and Annie also writes a blog The play blog of the western world.

Annabel is harassed by a strange man at a party – nothing new. As she recounts what happened, she imagines how the man’s version of events differs to her own. An exploration of how one story can be told in multiple ways.This is a work-in-progress which will be staged as part of Scene and Heard this spring at the Smock Alley Theatre. 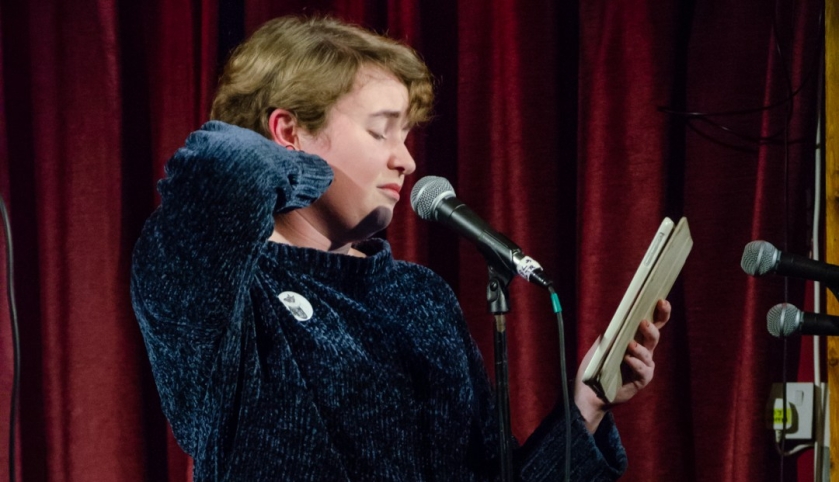 The next piece was ‘Once Upon a Time (How Original)’ by Diffused founder Alice Keane. Diffused is a Galway based theatre company who have produced two successful shows and are currently preparing to bring their next show the Tony/Olivier award winning comedy “The 39 Steps” by Patrick Barlow to the stage. The show will be performed in the Town Hall Studio the 6th, 8th and 9th of March.

Eustace the Businessman has been dragged away from his lovely, failing insurance firm to go on a hairbrained quest with the ever-bubbly, ever-narrating fairy, Rubina. In a world full of magic, Businessman has always been an outcast and suddenly now he’s a ‘chosen one’. In this scene, Businessman questions this quest nonsense and meets a few allies (Sort of).

The piece was performed by Oisin Mcdonagh, Sorcha De Faoite, Conor Mclaughin and  Alice Keane. Stage Directions will be read by Emma Walsh. 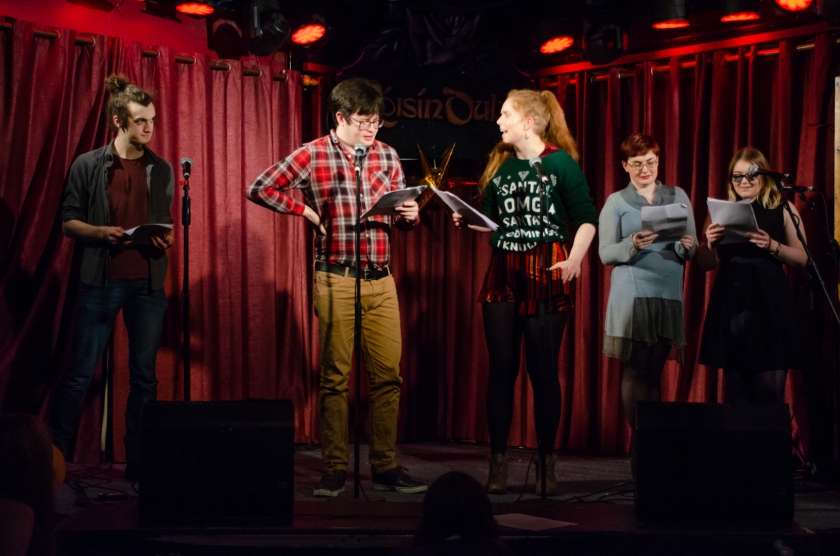 Diffused Theatre performing Once Upon a Time (How Original) by Alice Keane. Photo Credit – Piotr Łyszkiewicz.

The final piece of the night ‘Moonlight on Marble’ by our own Hazel Doolan was performed by Micheal O Fearraigh. Hazel was the director and writer of the award winning production ‘Match’ and has recently directed Eva’s Echo most recent production ‘Dayshift’. In this work in progress Devastated at the death of his fiancee Brid to illness, Oisin struggles to move on and is constantly living in regret, anger, loneliness and seeks for justice for his Brid’s sudden death. 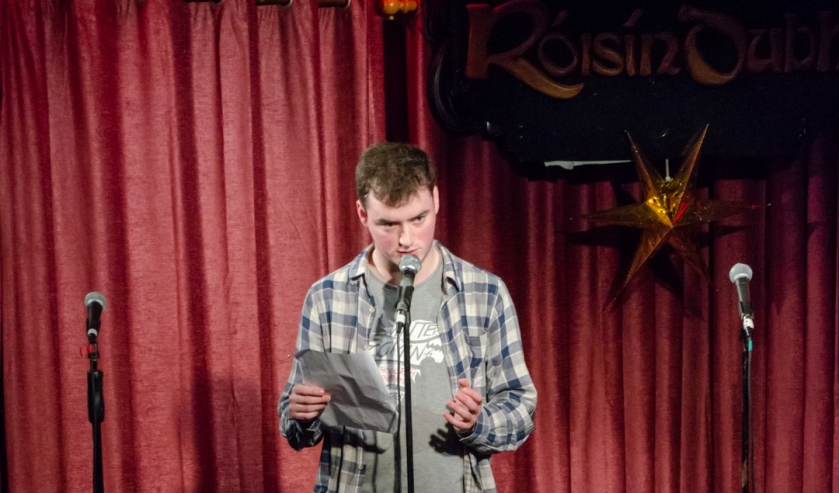 We are so grateful to all of the amazing playwrights and performers, The Róisín Dubh, the lively audience and most importantly Jigsaw Galway, for permitting us to fundraise for such a marvelous and important organisation.

Jigsaw is the National Centre for Youth Mental Health. They believe a better life is possible for the hundreds of thousands of young people across Ireland facing mental health difficulties. And they passionately believe that with your help, their early intervention support and prevention can make a massive difference to the mental health of Ireland’s young people. Learn more about Jigsaw by visiting their website http://www.jigsaw.ie .