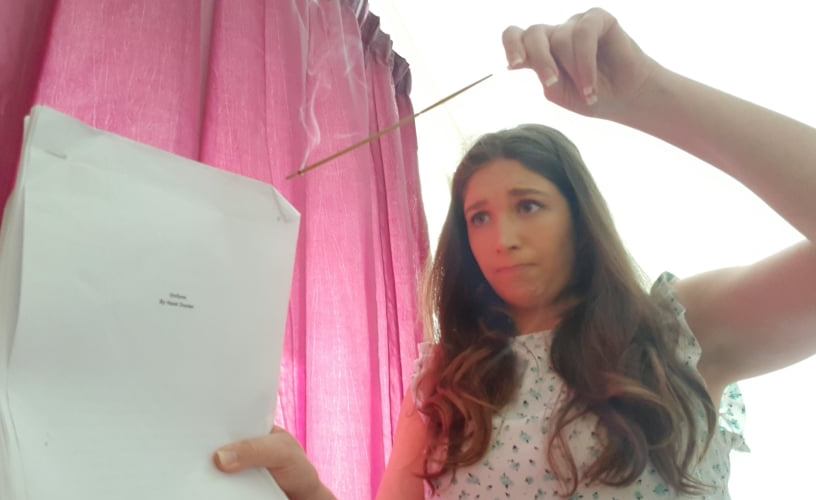 So, last year I wrote a play. For the reasons of the events after writing it, I shall no longer call it by name until post-production. Now I shall refer to it as ‘The Clothes Play’. Anyway, after writing ‘The Clothes Play’, we set out our rehearsal schedule, meetings, key dates, and any other things that go into production. We were all set and then these things happened;

Due to a sudden storm, we no longer had a rehearsal space. We resorted to rehearsing in a team member’s house as we could only watch the trees bend like rubber throughout. Thankfully, it didn’t last too long and we were back in the rehearsal room the following week. It was an interesting start but we thought nothing of it.

Whatever it was, whether it be simple mistakes with the booking systems or something else, we were constantly moved to alternative rooms throughout. I made a joke that ‘This is the show of moving rooms, it’s like Alice in Wonderland!’

Rehearsals at this point seemed to be going too well. We were half way blocked, I was half way off book and everything was great. I didn’t want to jinx it (maybe I did!) but I couldn’t help but feel that this would be a great show. I went home happy that weekend looking forward to the next week.

I think we know how the rest goes. The 12th of March 2020 will always be a date that will stay with me. After getting the news at work my first thoughts were of ‘The Clothes Play’. Rena and I talked that evening, we were confident that all will be fine and planned for online rehearsals. We didn’t even get that far in the end.

With 2020 going down the rabbit hole, we were hopeful and planned our programme for 2021. ‘We’ll be well over it’, we thought. ‘Theatres will be open’, we said.

Why is The Clothes Play cursed?

Similar to The Scottish Play, a string of strange and unlucky events occurred throughout. Thinking back, I’ve asked myself why and how is it possible?

The Faces of Eve

Using this trope, I narrated the lives of numerous women. I portrayed them all at different stages of their lives; Maiden, Mother, and Crone. Firstly, they say things come in threes and – Well ok, more than three things happened but three things did happen before the 12th of March. Secondly, perhaps I enraged a deity or possibly Hecate for using this trope so they facilitated these events. I’d rather not make a third point, see point one.

‘Uni-’, I mean ‘The Clothes Play’ narrowly revolves around the women who all happen to attend this religious secondary school where nuns would’ve had a close connection. Whether they be passed/present teaching staff and or fellow residents with the borders in the convent. Maybe some nuns’ spirits didn’t like what I wrote?

For these reasons and more, I have strong thoughts that ‘The Clothes Play’ is possibly cursed. Once we’re in the theatre I won’t dare say the name, or light three candles on stage or wear blue. Wait, one of the costumes is blue. Dang.

Join us for ‘The Clothes Play’ at the Town Hall Theatre from the comfort of your own home May 22nd at 8pm → https://tht.ie/3586/uniform